There… I said it .. DON’T BE AN ASSHOLE. Ladies, I’m looking straight at you. It’s been awhile since I talked about something I call “girl on girl crime” ( just went and checked – my last blog post on this was in May so it’s fine – yes?)

It’s a phrase I first used when Sheinelle Jones worked with us a FOX 29. It’s something I talked about a lot with the lovely Kacie McDonnell.  Women can be assholes to women and I think it has to stop.  In a world where we are all looking at Facebook. Posting stolen jokes to look funny or delivering overly edited versions of ourselves, we need to stop being jerks to each other. I’ve done it — judging people for not measuring up to my ridiculous fake standards.  It needs to stop so that our girls … all of them … can have a better shot at friendship and success.

As you may know, I work in a TV station. That means that every day I voluntarily drive myself to a giant pile of ego and jealously.  Sure, most days are fine. But, on the other days there are people yelling over each other in the meetings just to be heard. There are people who think they deserve more attention than others because their salaries are bigger. There are people who think they don’t have to work as hard as the others. Men and women are being judged on their appearance and popularity. IT’S THE TV BIZ FOLKS !!  Some of the people are lovely. All of them are watching their backs… trying to figure out who really likes them … it’s not my favorite part of the job.

That’s why I try to surround myself with nice people when I am not at work. I don’t expect the people I surround myself at home with to be rooting against me. SO STOP ROOTING AGAINST THE PEOPLE YOU HANG OUT WITH !! If you think your friends are jerks … block their calls and move the hell on.

Below, you see pictures of some of my friends. What you likely don’t know is that I surround myself with friends from different crews. I have a 4th grade daughter and a son ( eek ) in 8th grade.  The women you see below are the Moms of the kids in both those grades.  I also have cool neighbors that I hang out with and yes some of the amazing people I work with are my actual friends … and it’s awesome. 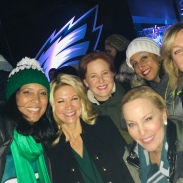 IF YOU ARE JEALOUS OF SOMEONE OR SOME THING THEY GET TO DO — SAY IT !! Telling a friend you are ‘ jealous’ that they get to take a nice trip or buy a nice handbag does not mean you aren’t rooting for them. I was thinking of this post because in a few weeks I will be speaking to teen girls about bullying. I’ll also be talking the social media shit show we’ve created.  The girls in high school believe that the ‘pro woman’ stuff is all for adult women.  I would say my adult girlfriends would feel the opposite.  So here we are with the whole damn world watching.  Are we going to be nice but crazy fun girls? Or are we going to sit and home wishing we had better friendships and cooler adventures??

I am saying no to “girl on girl crime” and yes to champagne, bad hair days and smiles.  Lots of smiles ladies !! Have a great week. DON’T BE AN ASSHOLE !!